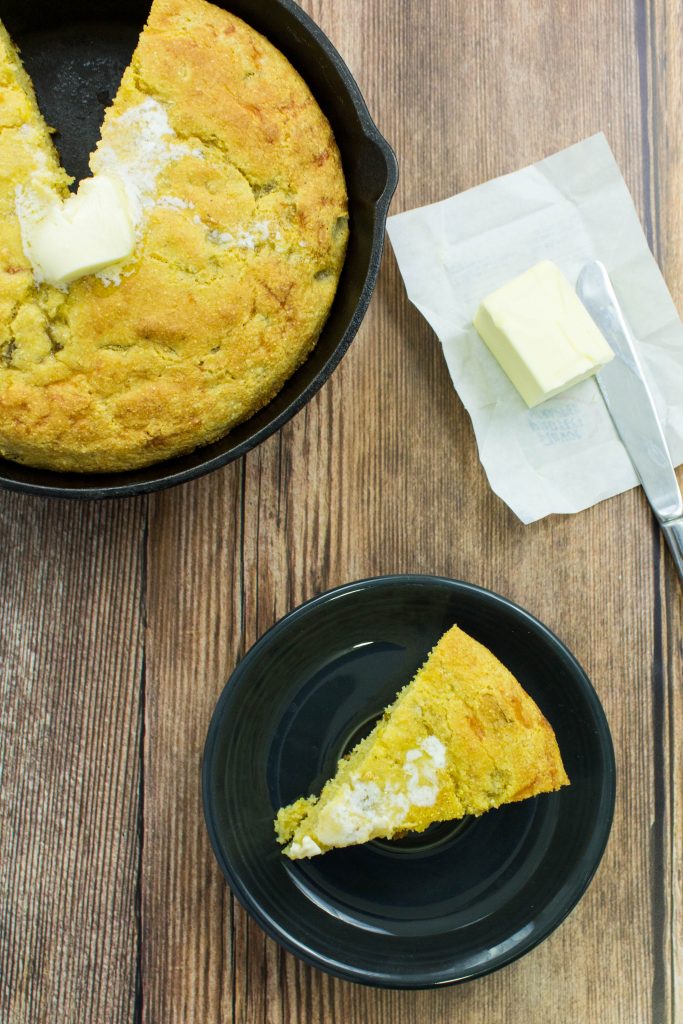 I’ve learned over the years that cornbread is a true staple of Southern cuisine.  Cornbread is something that was pretty much always on the dinner table once a week growing up.  There are very specific meals that must be served with cornbread.  Now as an adult, I carry on this tradition and serve cornbread for those meals.  My Skillet Green Chili Cornbread is a unique and healthy twist on traditional cornbread.  Fluffy cornbread with layers of cheese and green chilies!  This is a Weight Watchers friendly recipe and each serving is 5 SmartPoints.

Growing up, I thought that the food that I ate was the same that everyone else ate.  Basically, I thought that everyone ate pot roast or chili on Sundays like me.  I was probably a little bit sheltered as a child and didn’t meet very many people that were not from Pasadena, Texas (yep that’s my hometown!) until I moved away for college.  My husband is from Washington D.C., which is WAY different than Pasadena.  He grew up eating a huge variety of cuisines, none of which were what I ate growing up.

A while back I made a stew and told him that I wish I had made cornbread.  He didn’t understand why I would eat cornbread with the stew and I was SO CONFUSED.  Then he said he didn’t grow up eating cornbread and I remembered how cornbread really is a Southern food.  Over the last few years I’ve seen a major influx of Southern style food creep up around the restaurant scene.  A few weeks ago, my husband and I went to a restaurant in Downtown Indianapolis, called The Eagle, that specializes in fried chicken and they had a side dish called Spoonbread.  It was basically a mini cast iron skillet cornbread that has chunks of corn topped with maple butter.  I totally could have eaten the whole thing as my meal!

Cornbread is near and dear to my heart.  I remember my mom making cornbread muffins for her goulash (which I have on my list of dishes to recreate) and served with stew.  Cornbread is even in our dressing at Thanksgiving, which I must say is the BEST dressing ever.  Cornbread serves two purposes really: to taste good and to soak up all the juices you cannot reach with your spoon in stews!

Traditional cornbread can be full of fat and carbs so my take on this Southern staple is a healthy version.  Instead of buttermilk, I use 2% milk and Greek yogurt.  It might seem odd but it totally works!  I also swapped all-purpose flour for white whole wheat flour.  I actually prefer to use white whole wheat flour rather than just regular whole wheat flour because it has less of a “nutty” taste.  Since I love Mexican flavors, I added canned green chilies and Mexican shredded cheese.

This recipe not only taste delicious but it’s super easy to follow.  In a large bowl, whisk together cornmeal, flour, baking powder, baking soda, and salt. 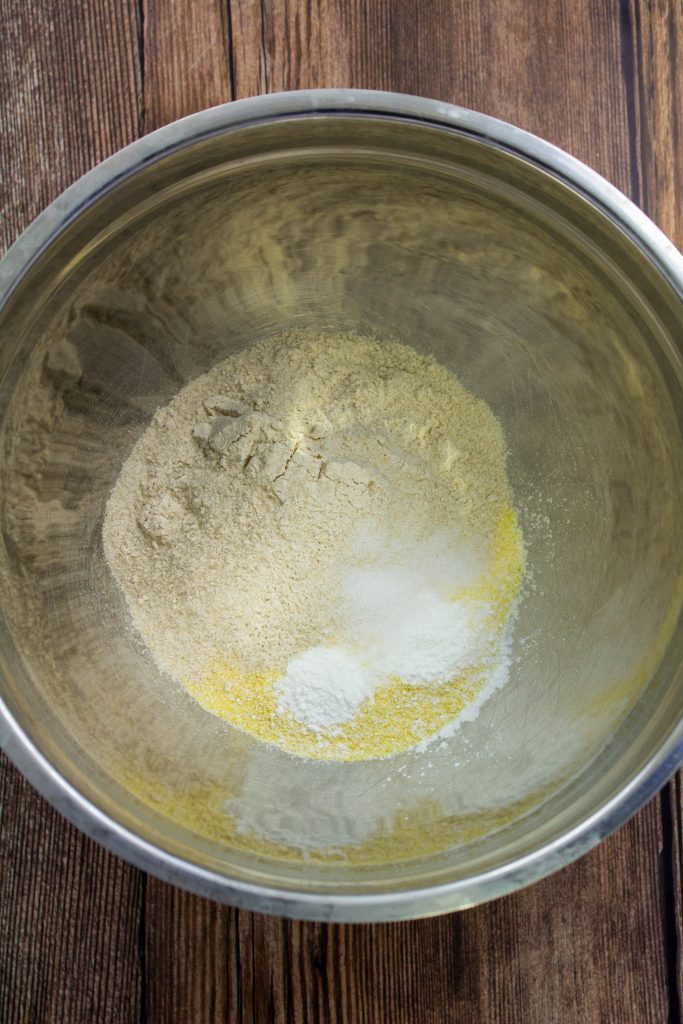 In another bowl, whisk together milk, egg, honey, and Greek yogurt.  To the egg mixture add canned green chilies and cheese. 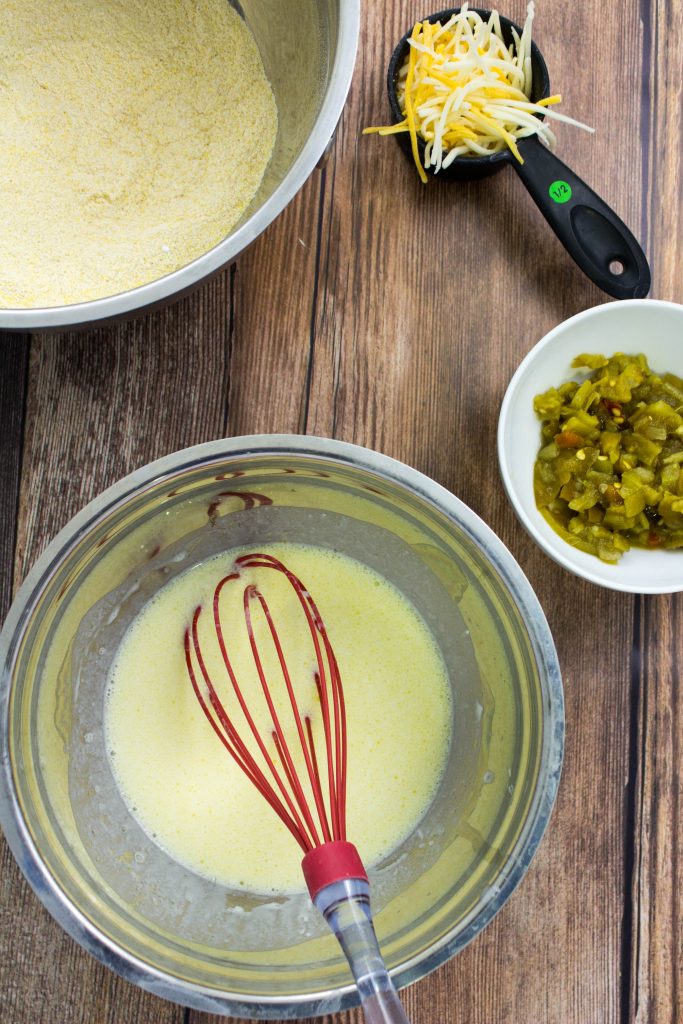 Add the egg mixture to the bowl with the cornmeal and stir to combine. 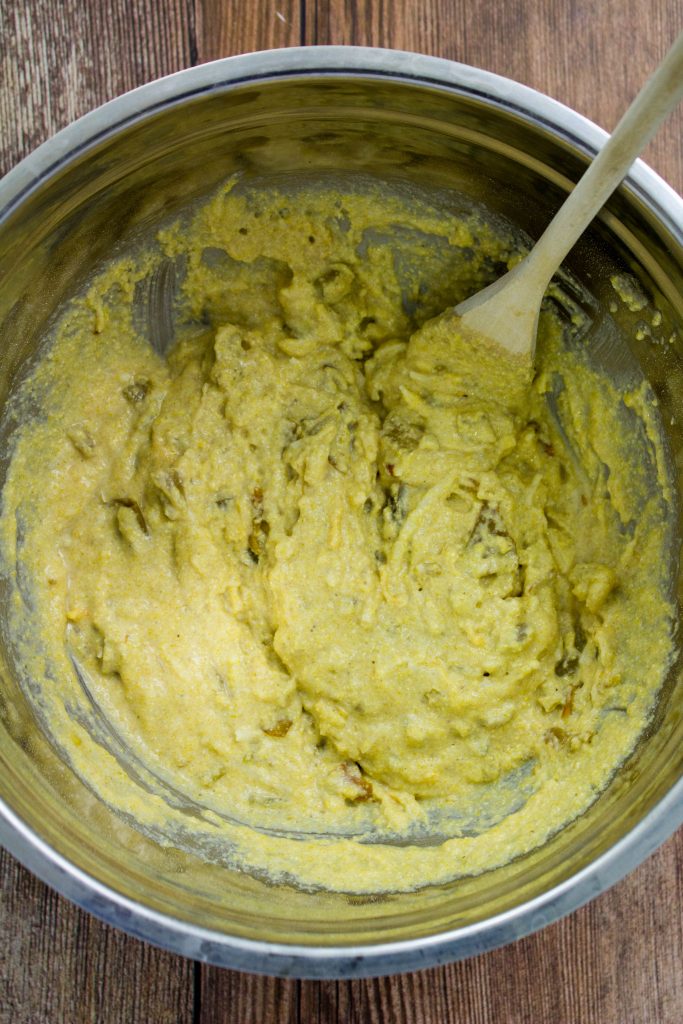 Coat a small cast iron skillet with a little bit of oil and heat the skillet over medium heat for about 5 minutes.  I recommend this step because it helps to add a nice crust on the bottom of the cornbread… and I love a good crust!!  Pour the batter into the skillet and bake for 25 minutes until golden brown. 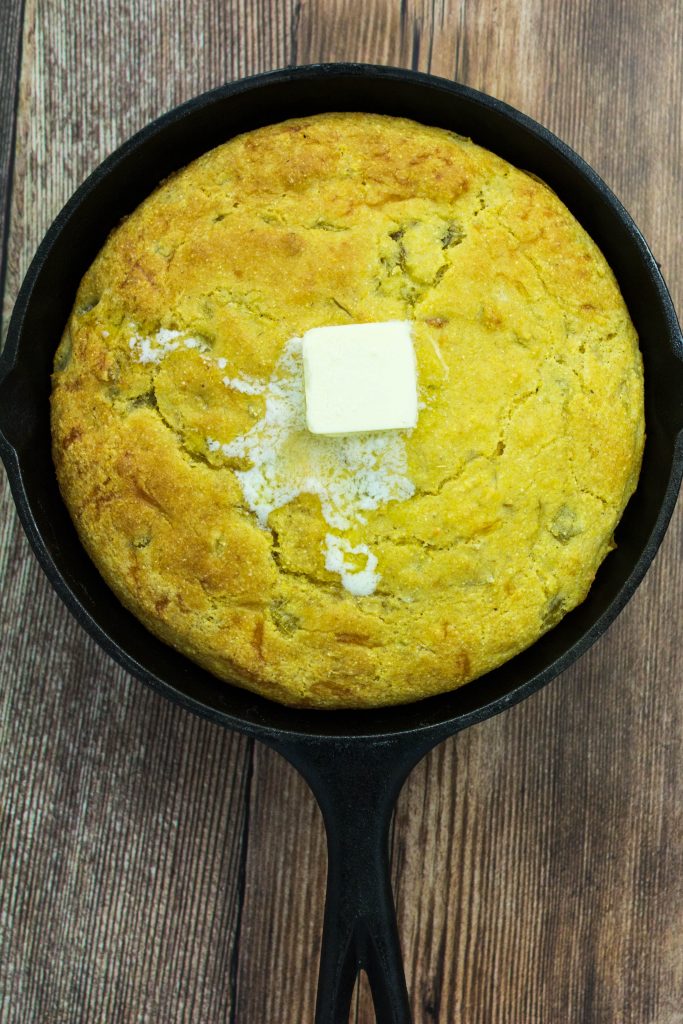 Skillet Green Chili Cornbread is a unique and healthy twist on traditional cornbread.  Fluffy cornbread with layers of cheese and green chilies!  Perfect as a side for soup, stew, chili, and gumbo!  Easy to make and delicious.  Less than 4 grams of fat and only 5 Weight Watchers SmartPoints per serving! 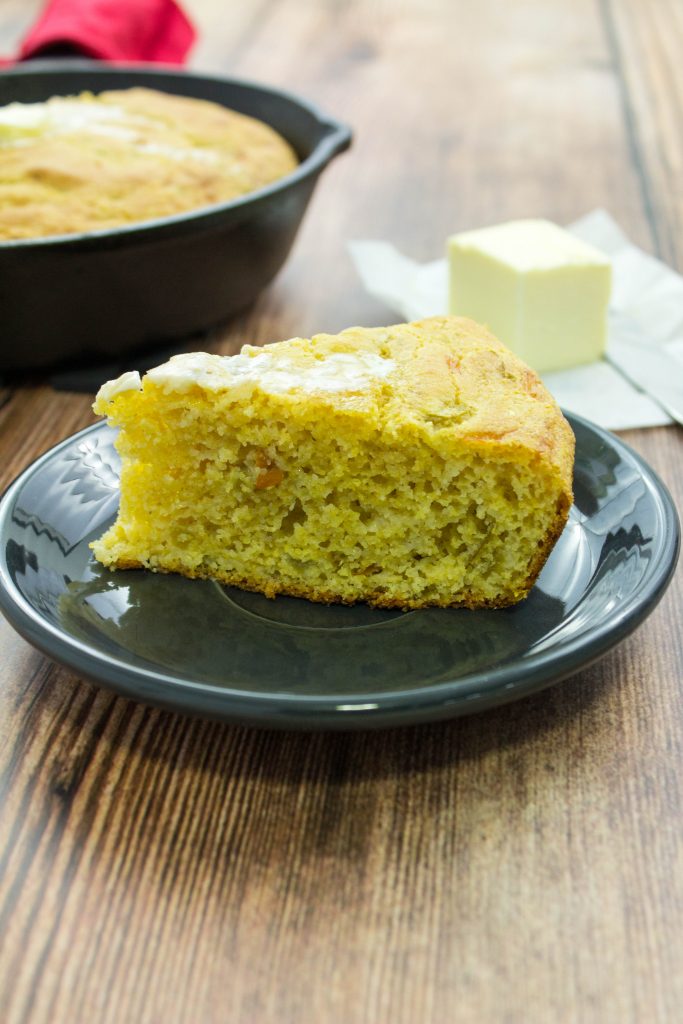 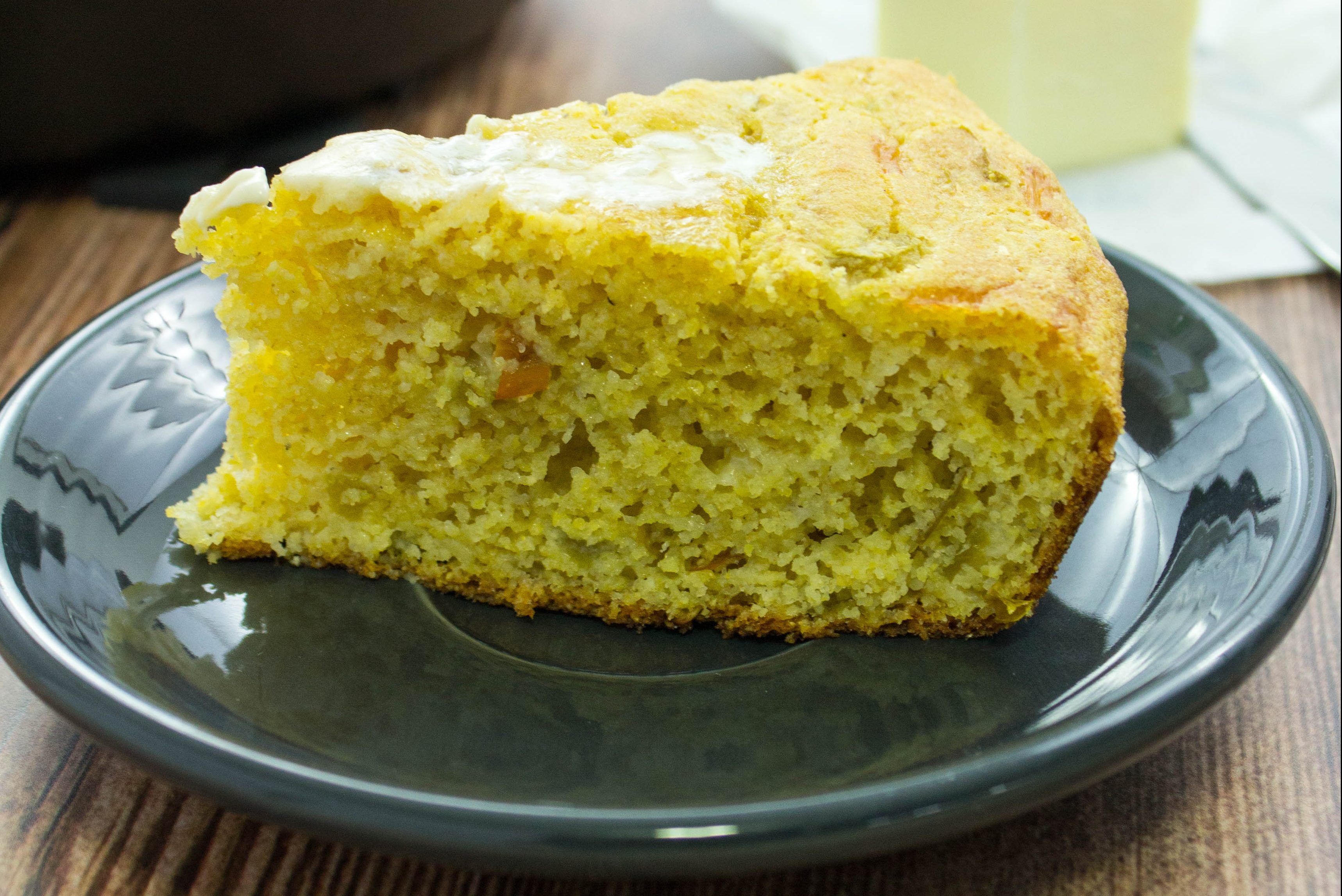